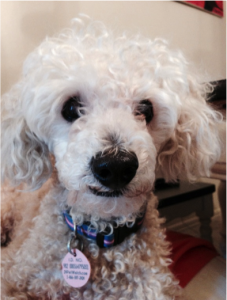 This wonderful “little man” was brought into Pima Animal Care Center, when a good Samaritan intercepted them, realizing that he was an older dog.  In fact, he was 13 years old!  It seemed that the owner had died and the family had no room for him.  They called Arizona Poodle Rescue and we took him.  He was already neutered and his teeth were sparkly.  He, no doubt, had been well taken care of.  We did a vet check and a blood test and he was declared fit as a fiddle. 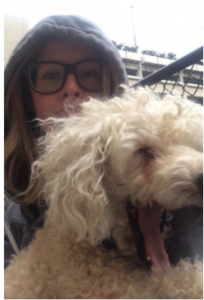 We had him groomed and, with great hope in our hearts, placed him on Petfinder.  His foster mom named him Grampa.  A young lady, named Blaine, fell in love with him.  Blaine had tears in her eyes when she finally got to meet Grampa. Wanting to be totally upfront with her, we explained to her the perils of adopting an older dog.  She stuck to her plan and adopted Grampa.

Upon getting him home, she took him shopping for a new bed and spiffy jackets. 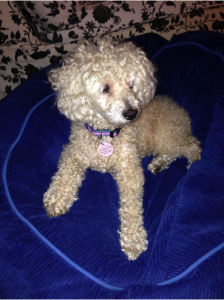 She said she had plans to travel to the east coast with him to introduce him to her family.  A few weeks ago, Grampa took his first plane trip to visit her family. 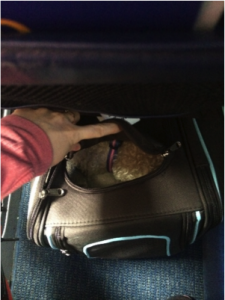 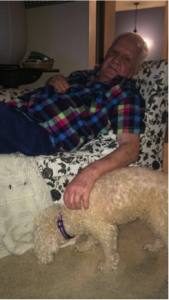 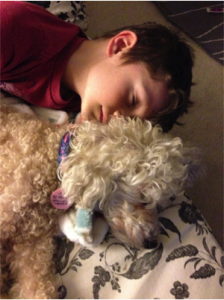 Grampa stole the hearts of her entire family.

Blaine:  “So here are my two Grandpa’s! My niece and nephew loved him so much too!  I think my family was definitely more sad to see Pap come back to Phoenix than me. Haha he is such a sweet boy. I just adore him. I think he finally knows he is mine and safe cause he is being a little protective of me. He growls when he is sleeping by me and anyone else tries to touch him. We are all able to laugh about it though. He is such a cutie pie.” 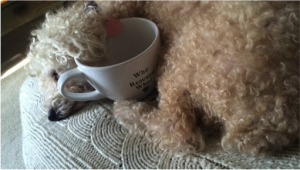 This story makes me have happy tears.

Arizona Poodle Rescue is an all volunteer group. We do not have a shelter. Our dogs are in private foster homes in the Phoenix area. We offer temporary care, spay or neuter, provide medical care when needed and find new suitable homes.

Arizona Poodle Rescue is a non-profit 501 (c) (3) organization. As a non-profit, we rely on the generosity of poodle and dog lovers in general to assist us in continuing our mission of saving Standard Poodles in need.

Arizona Poodle Rescue is a proud recipient of funding from Maddie’s Fund® (www.maddiesfund.org), helping to achieve a no-kill nation #ThanksToMaddie. To learn more about our partnership, click here.